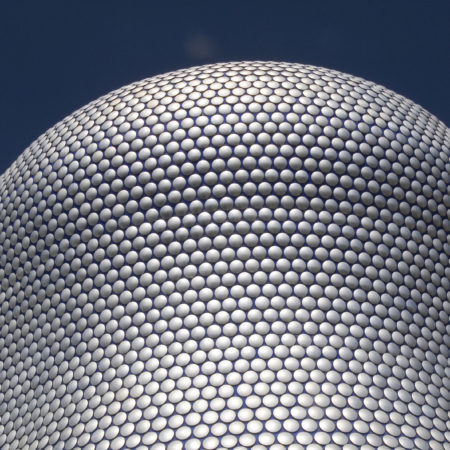 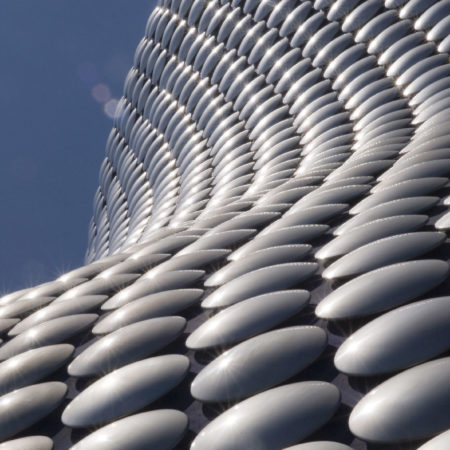 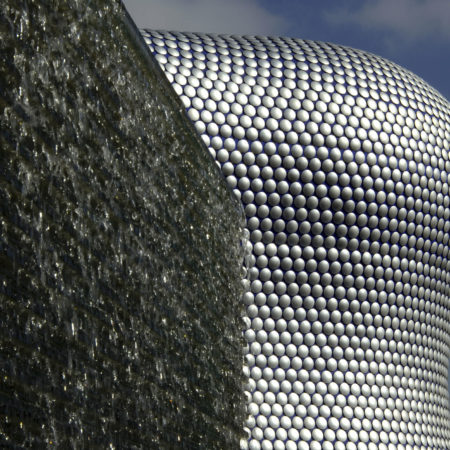 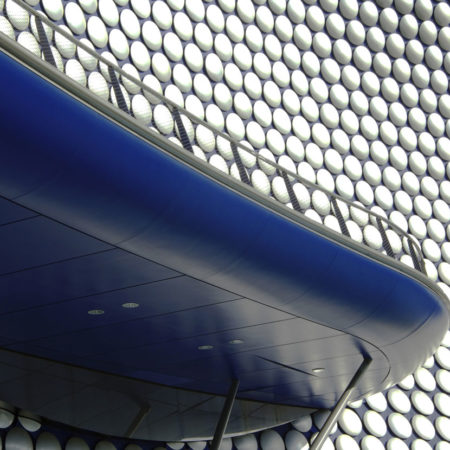 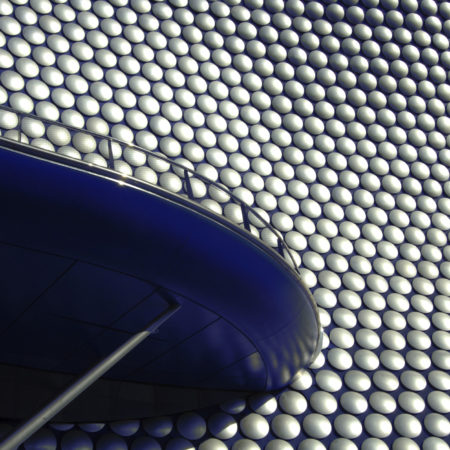 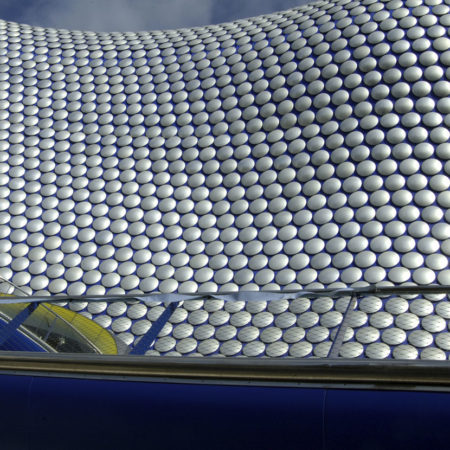 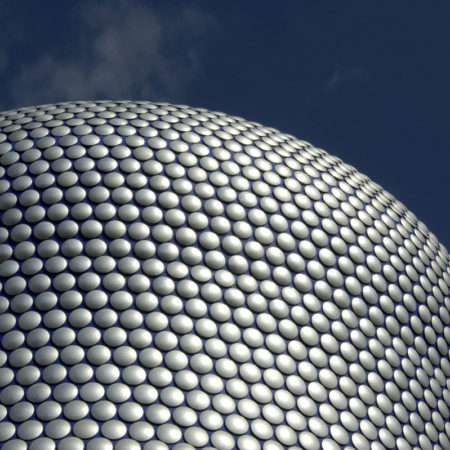 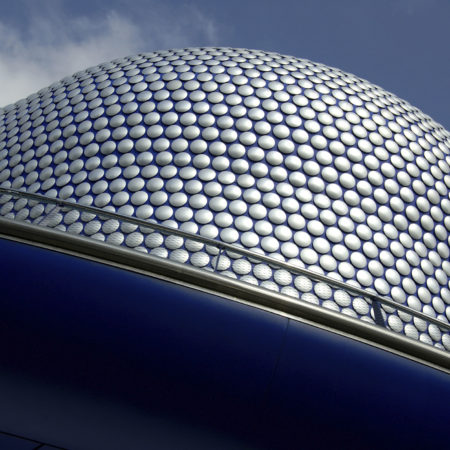 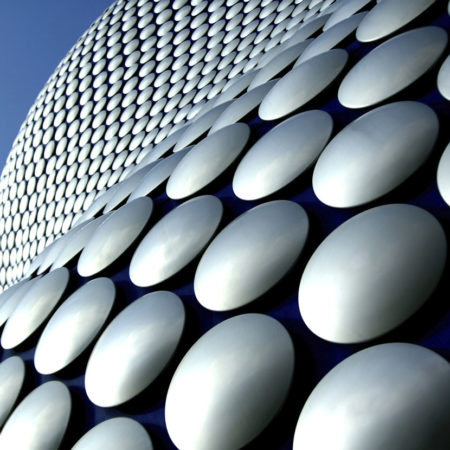 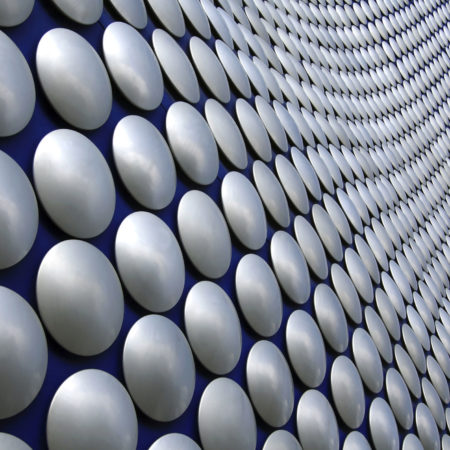 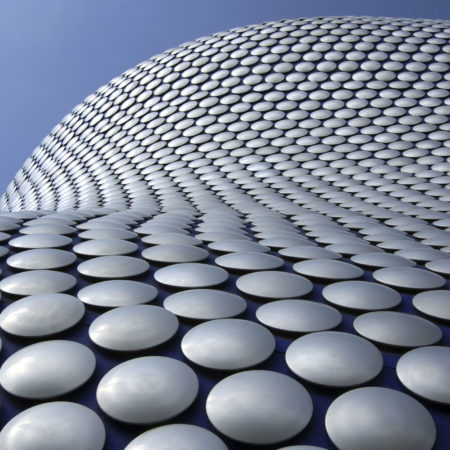 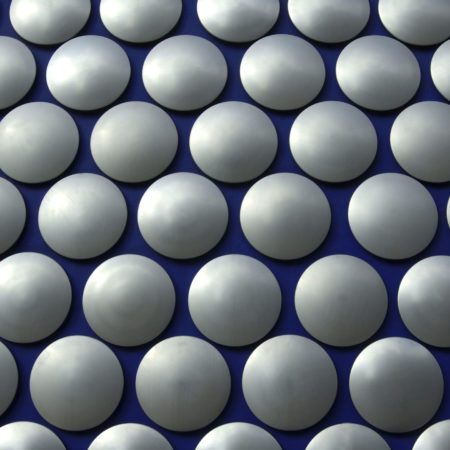 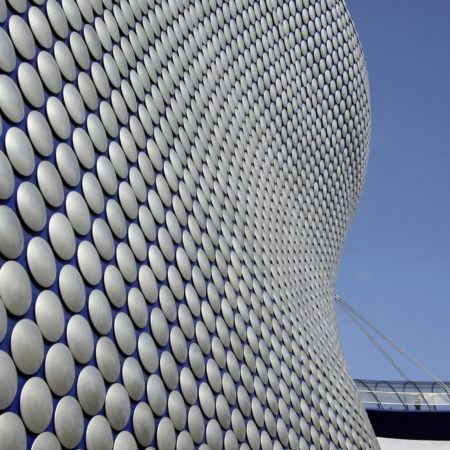 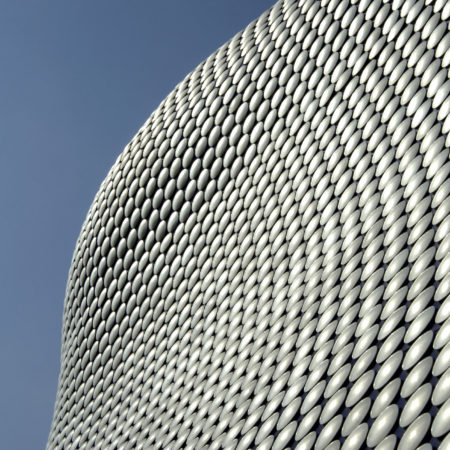 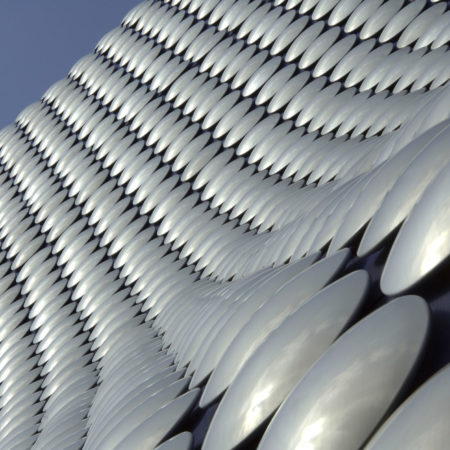 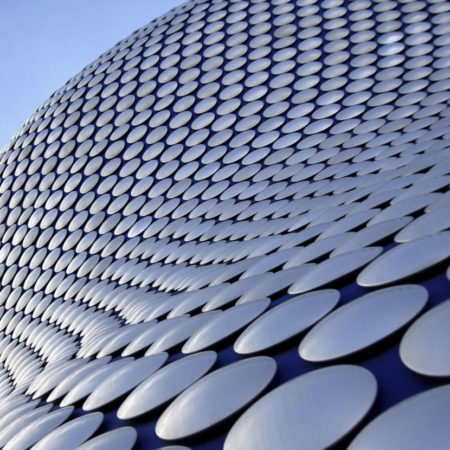 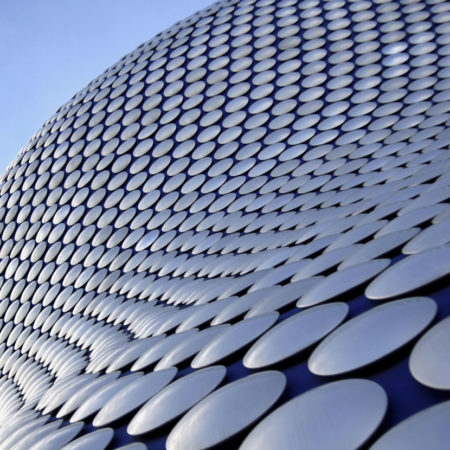 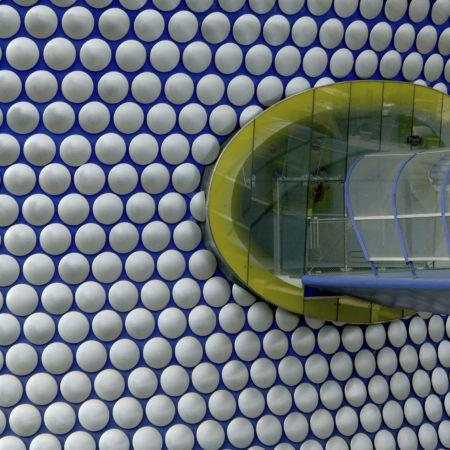 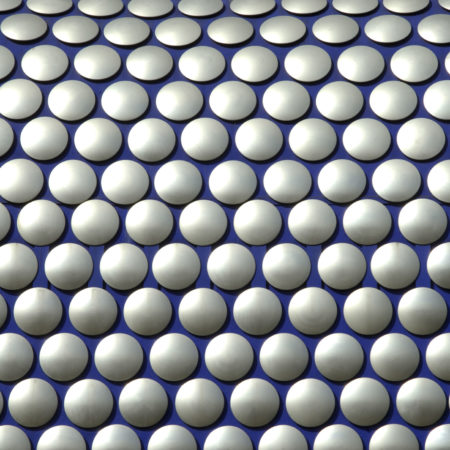 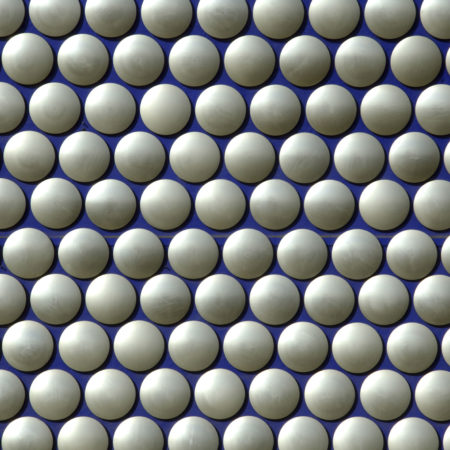 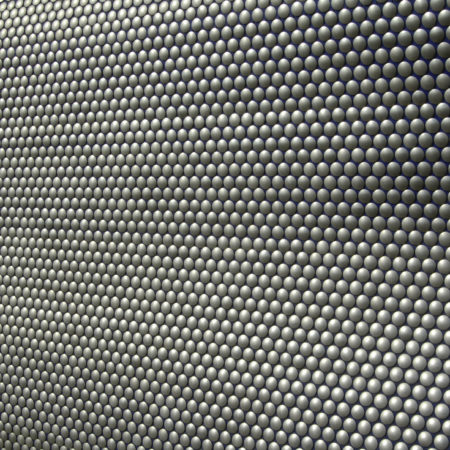 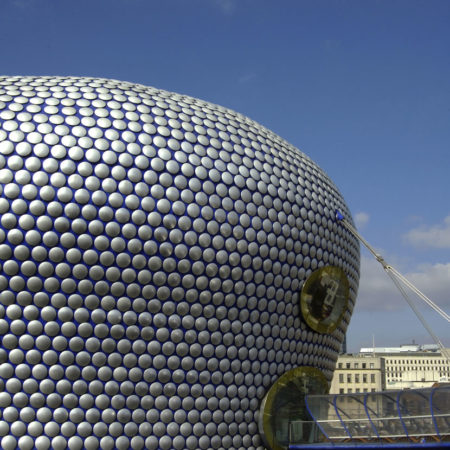 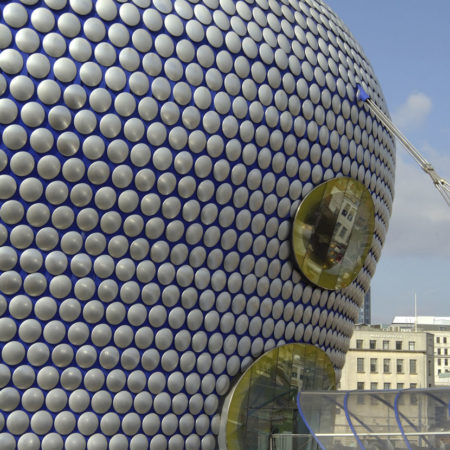 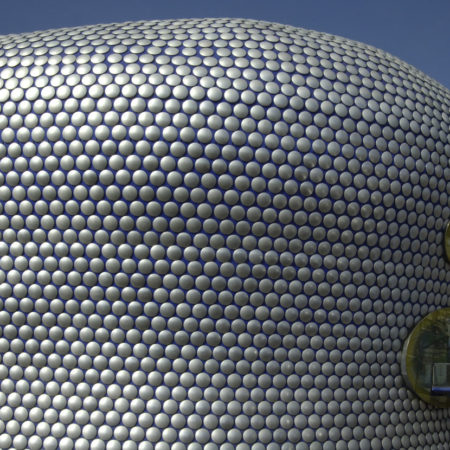 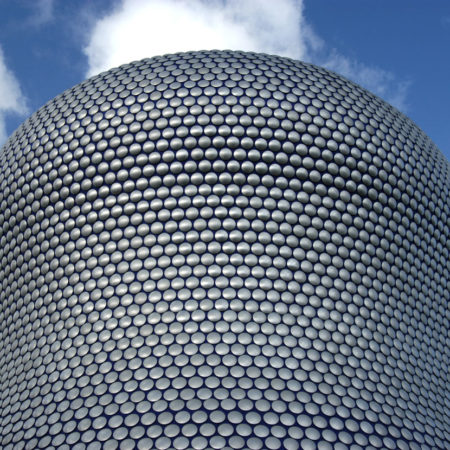 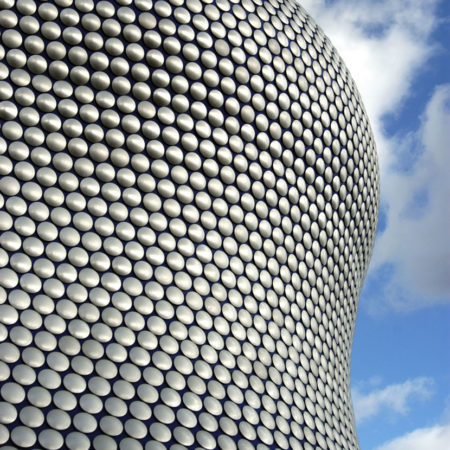 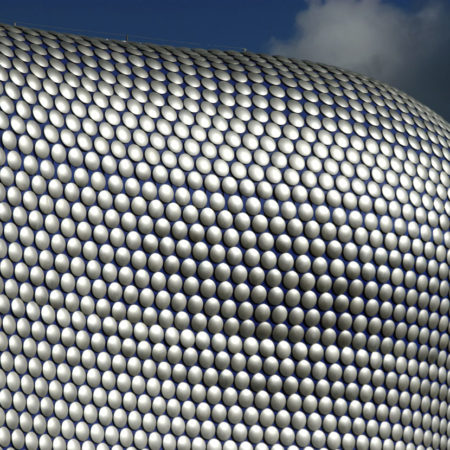 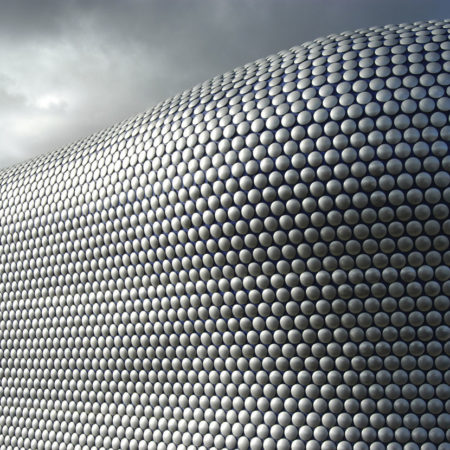 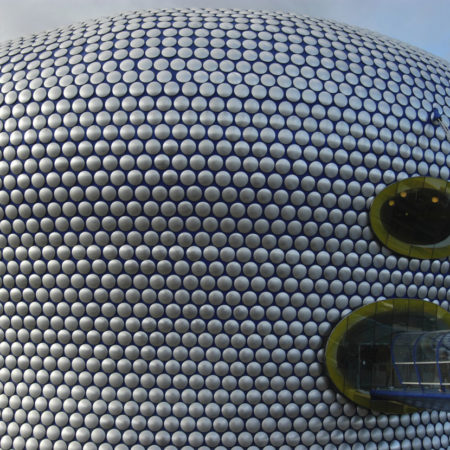 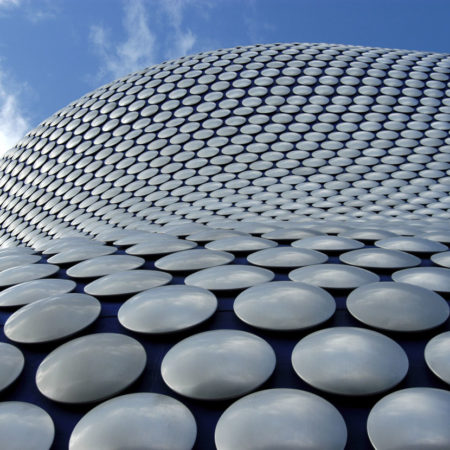 Selfridges store in Birmingham was created by the architects team Future Systems headed by Amanda Levete and her husband the late Jan Kaplický. It has the organic appearance of a giant mollusc covered in armour plating made of over 10,000 spun discs.

The first of these photographs date back to 2003, the year it was opened. The rest from 2005 when the weather was more varied. Some have dark oppressive black skies, some have bright blue.

The four storey building had a layer of concrete sprayed over it by a company called Shotcrete this short excerpt explains the technique:

Construction of the largest freeform building in the UK, utilising a combination of a structural steel frame and a reinforced structural sprayed concrete cladding system. The steel frame and concrete floors were constructed using traditional techniques, prior to the installation of the cladding. Working from an architect’s 3D model, Shotcrete Services created the outer structural shell of the building. Reinforcement was connected by shear stud plates attached to the steel frame. The two layers of H12 bar also incorporated the Shotcrete ‘lost shutter’ system, allowing the structural C40 shotcrete to be built up in two layers.

M12 sockets were cast into the structure to enable the fixing of over 10,000 steel discs giving the structure its iconic look. The use of the shotcrete cladding enabled the architects to produce a multi-curvature structural cladding solution that also incorporated a number of curved window and door features.

The word Shotcrete has now turned into the name for the process too. It has been used extensively on contemporary architecture and even sprayed onto the underground tunnels of Crossrail – now renamed the Elizabeth Line.