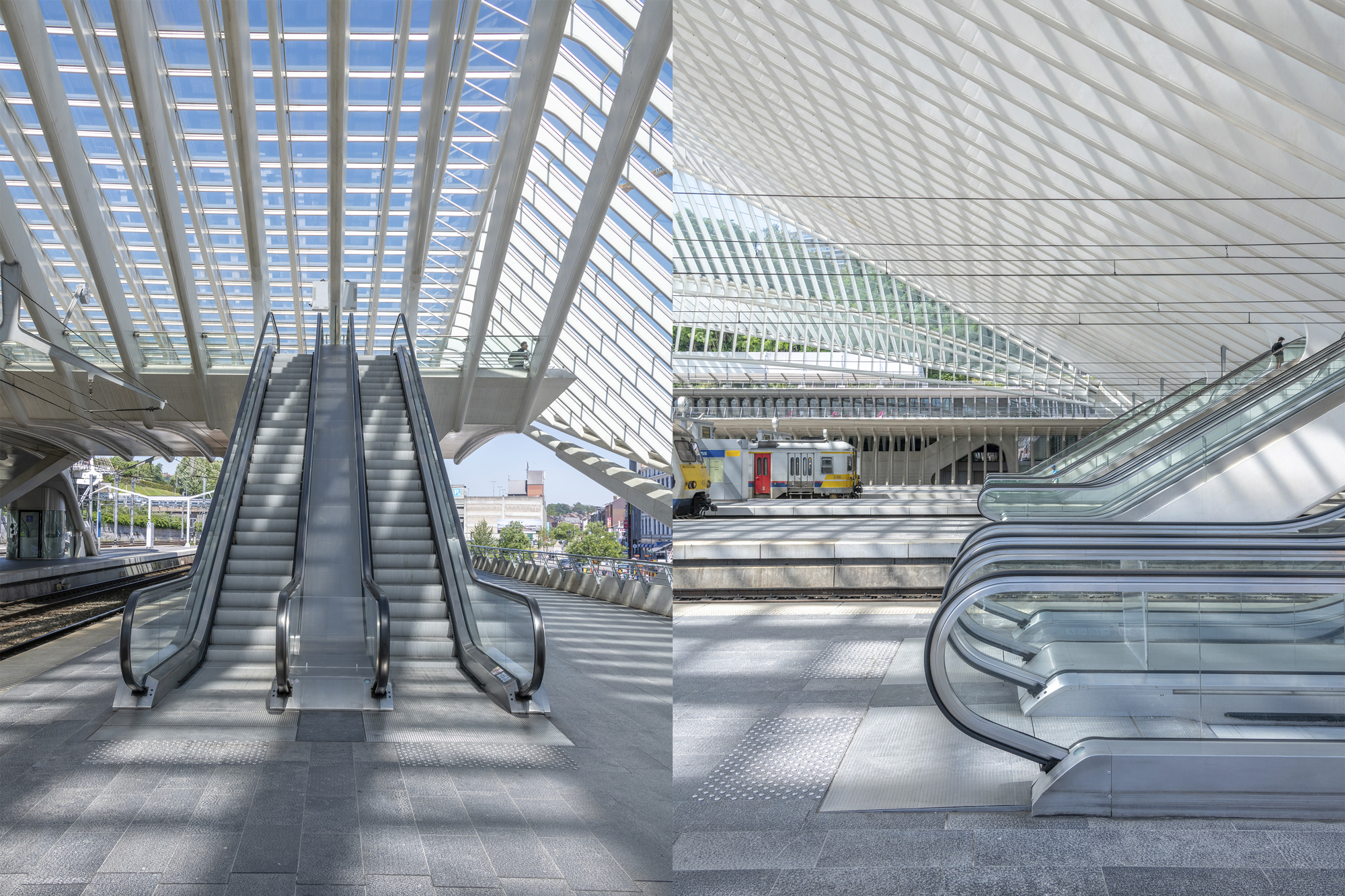 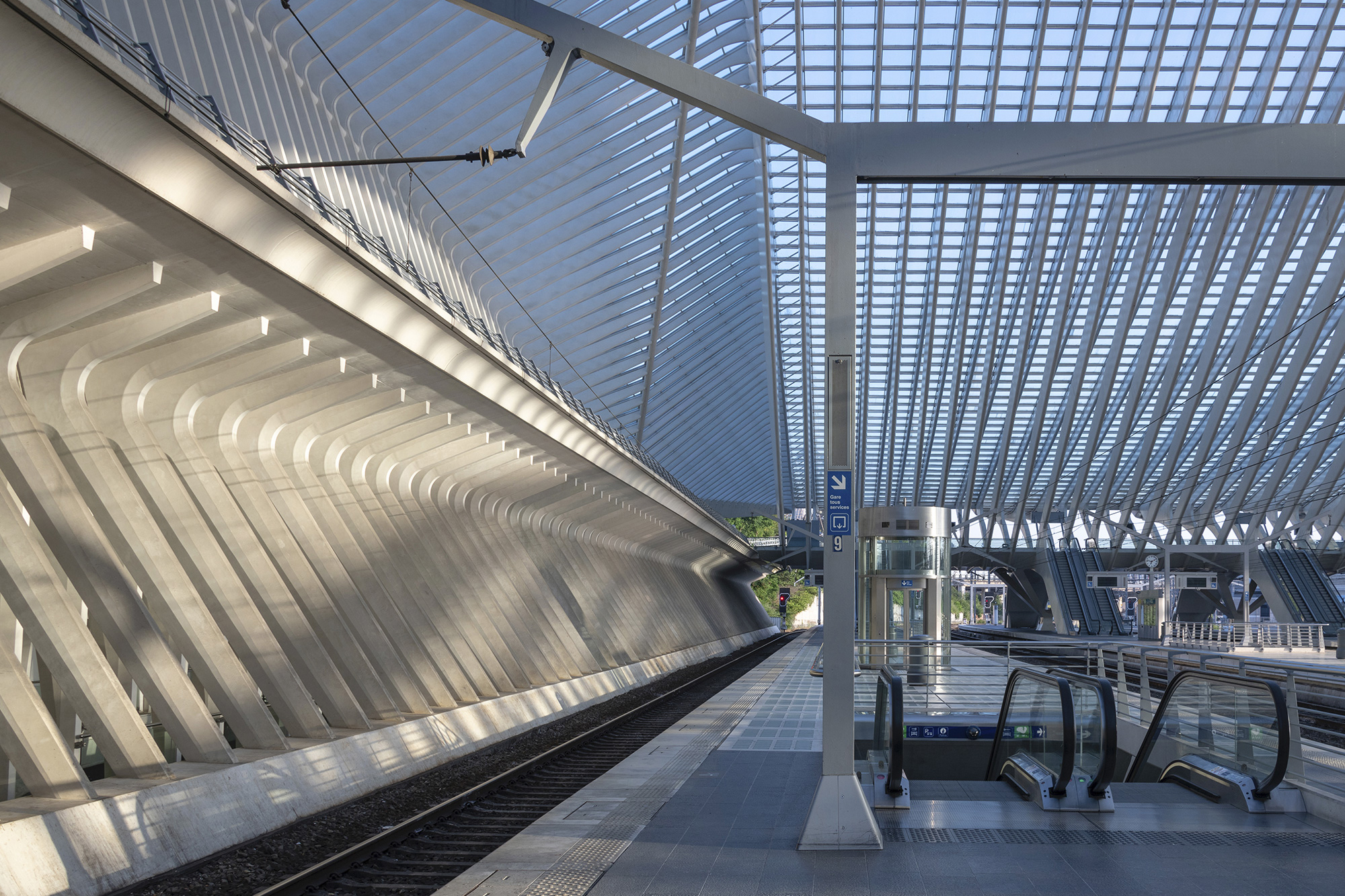 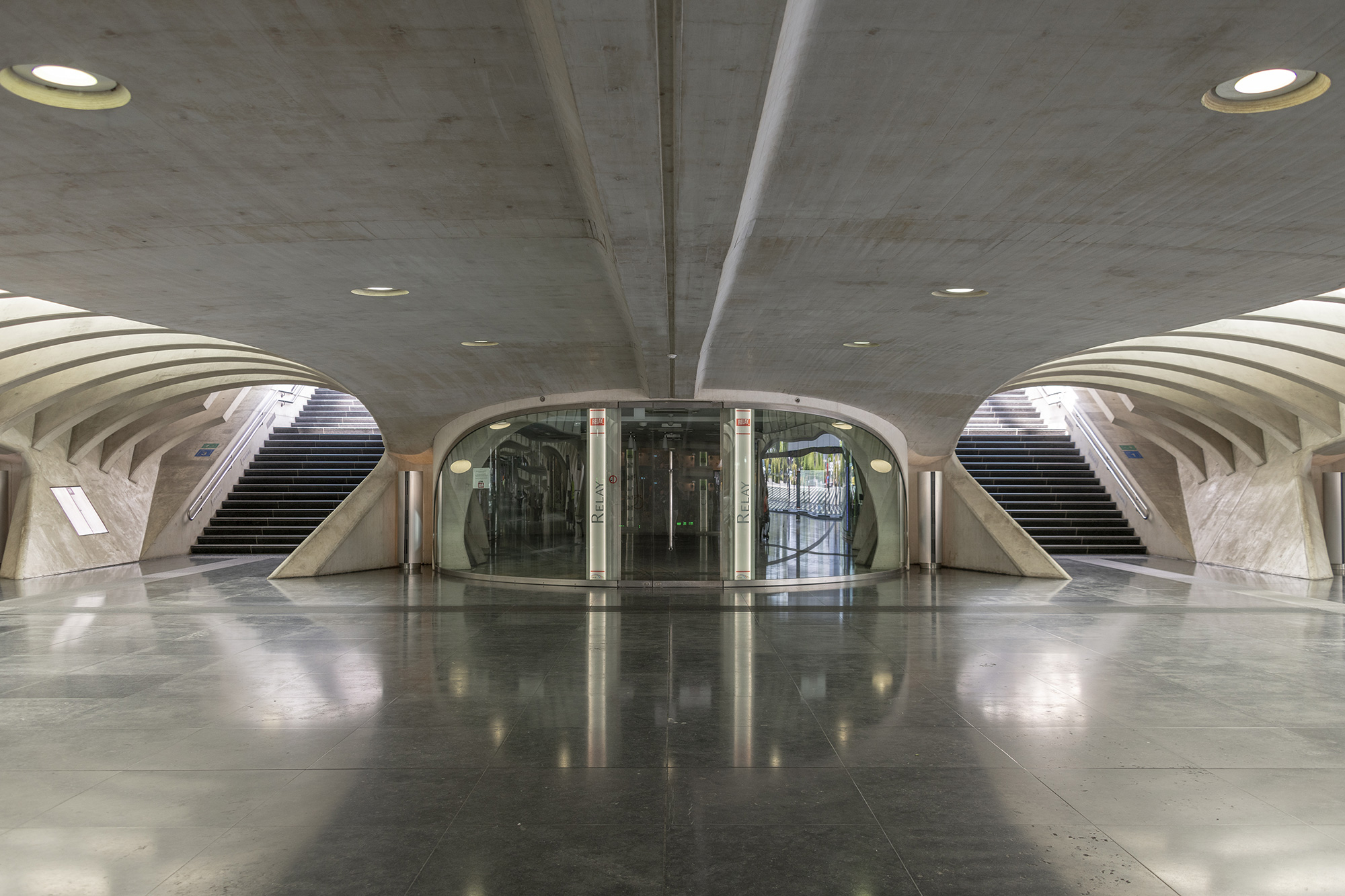 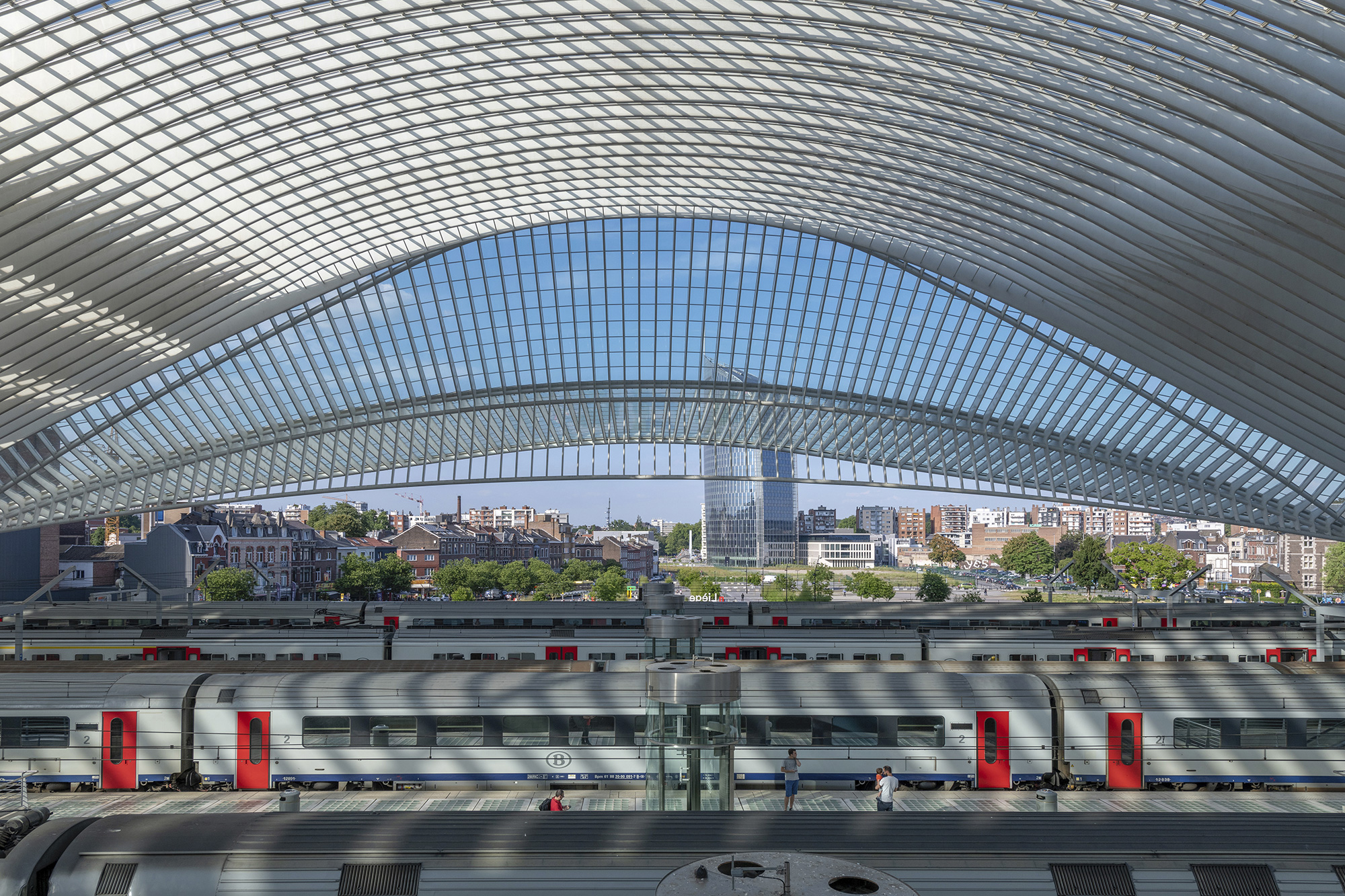 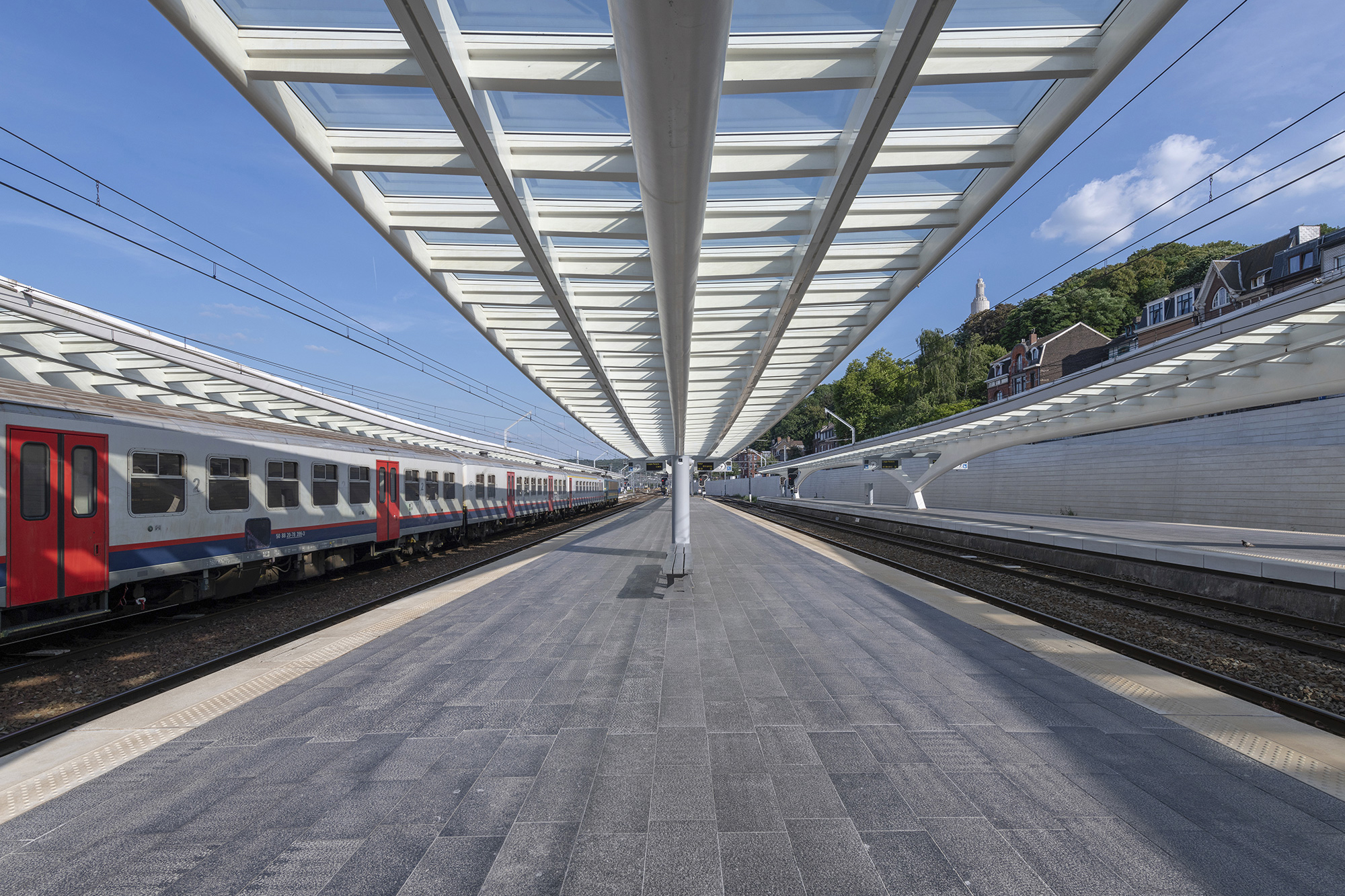 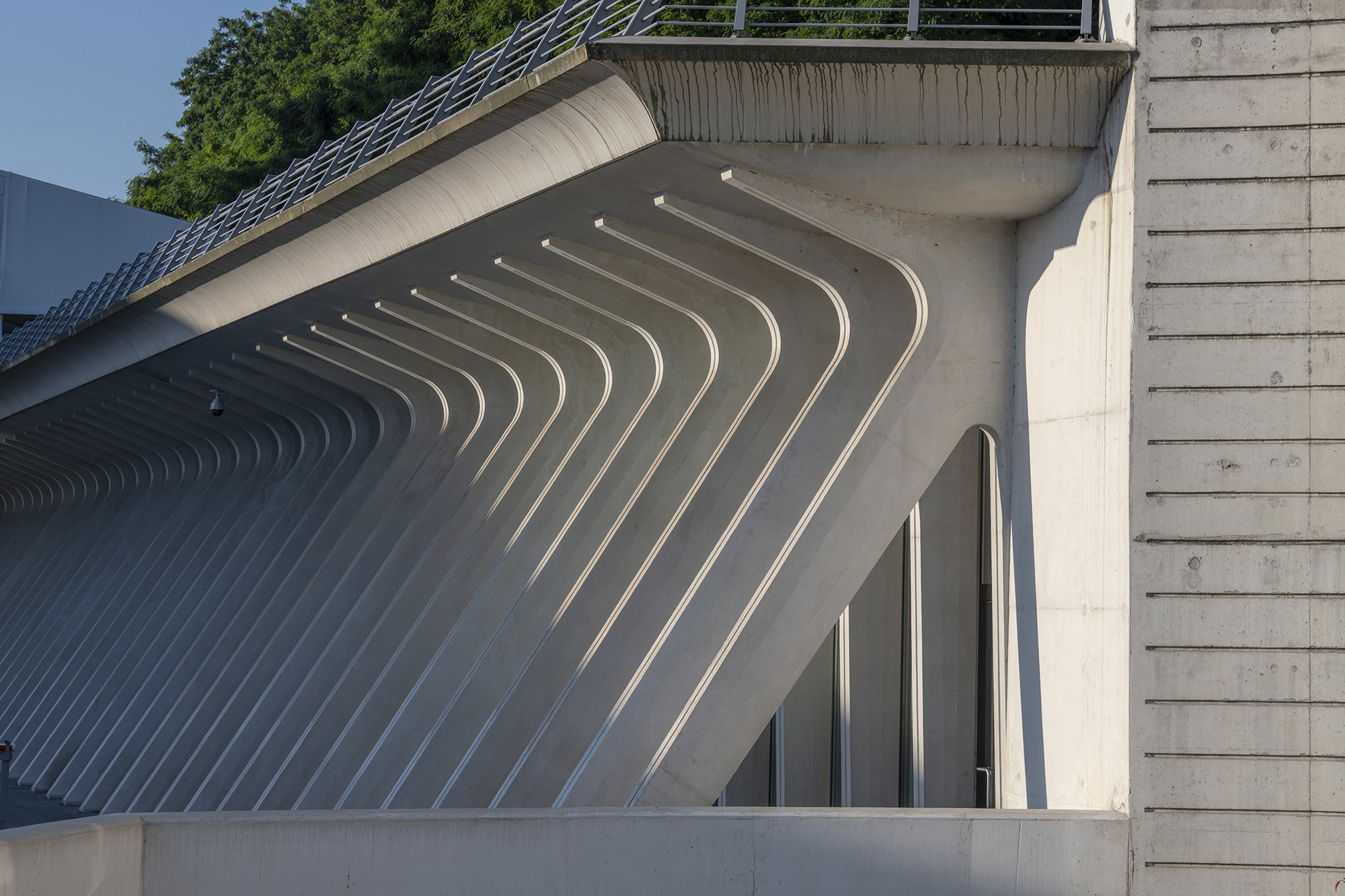 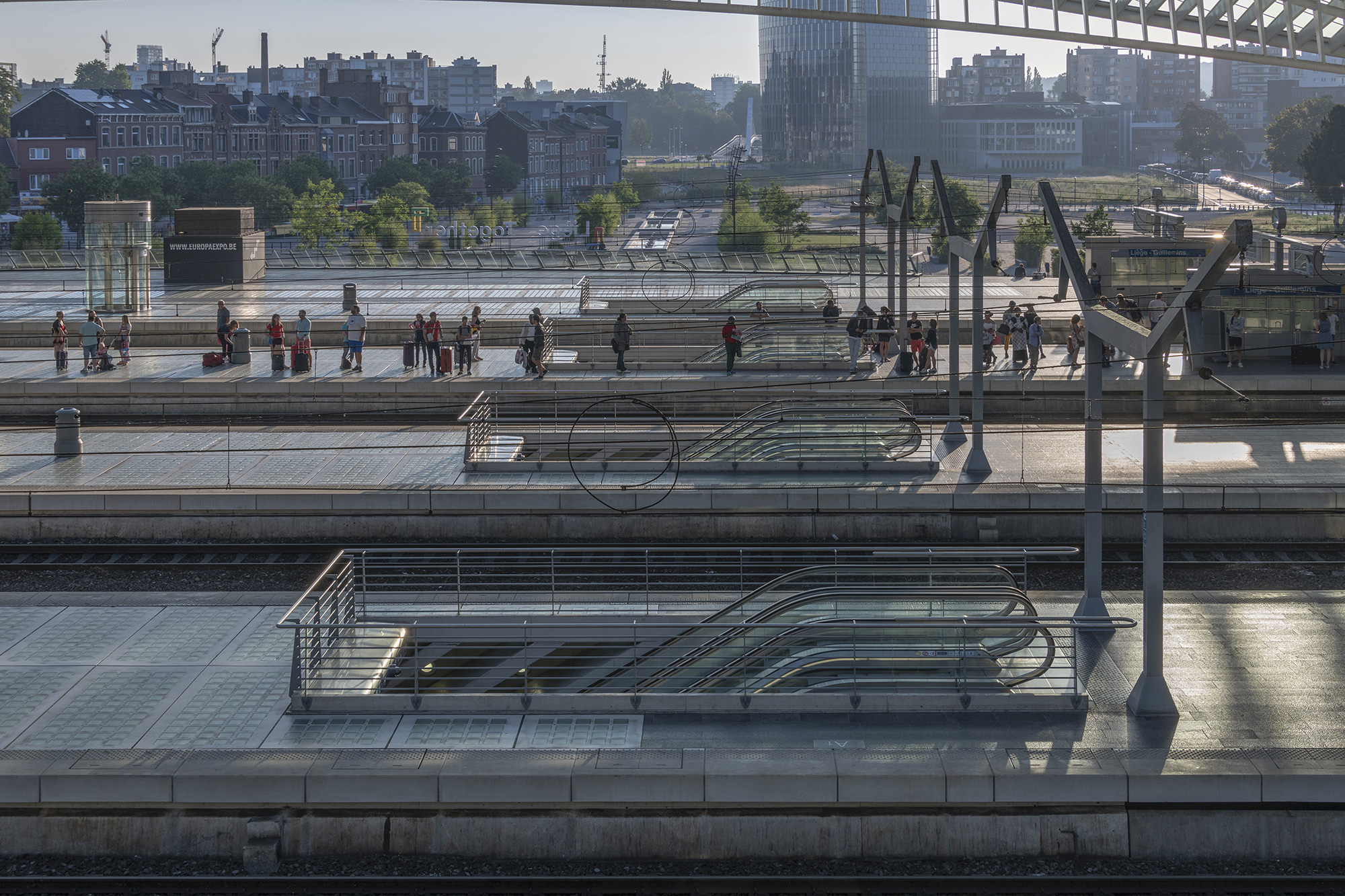 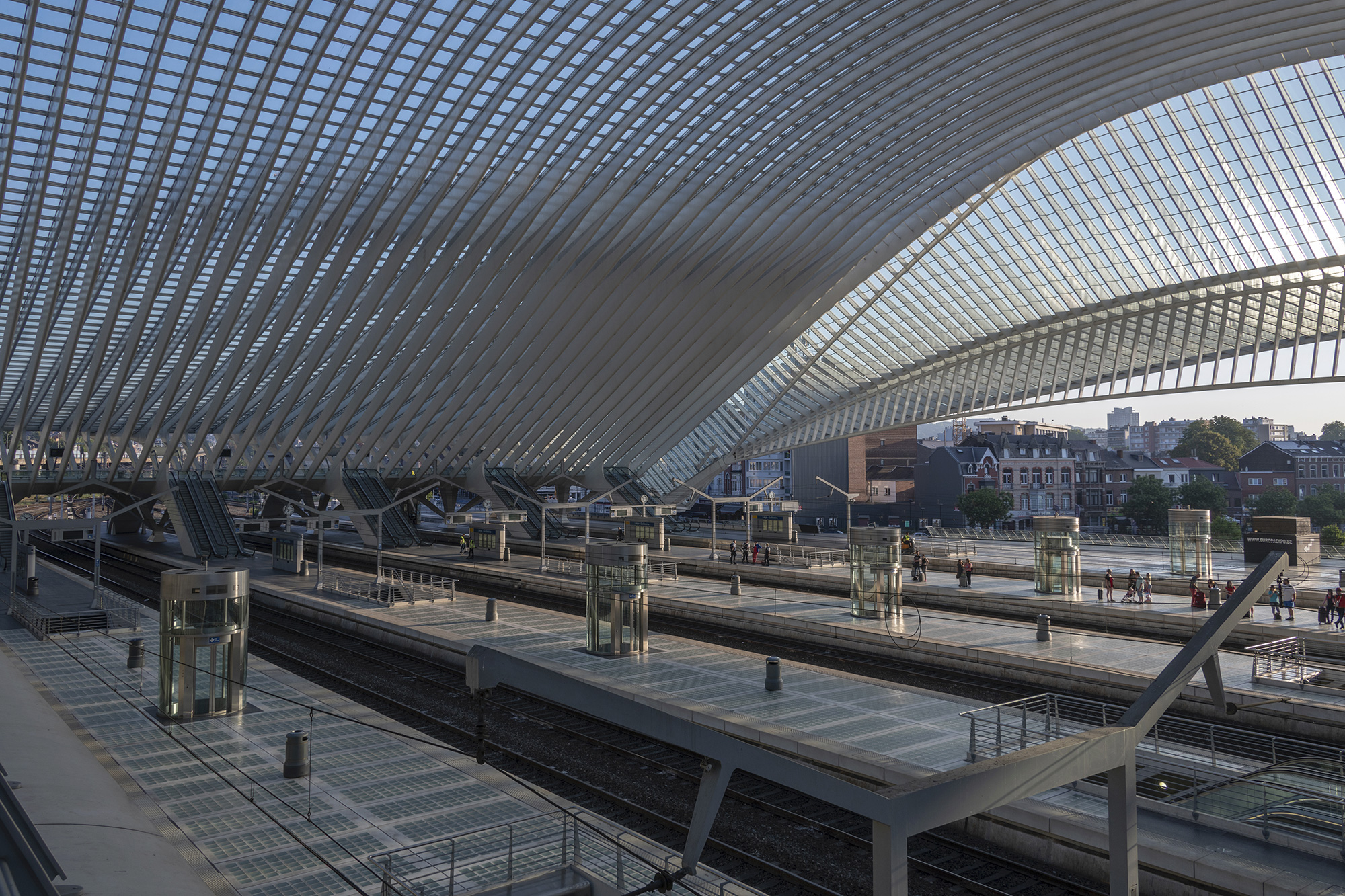 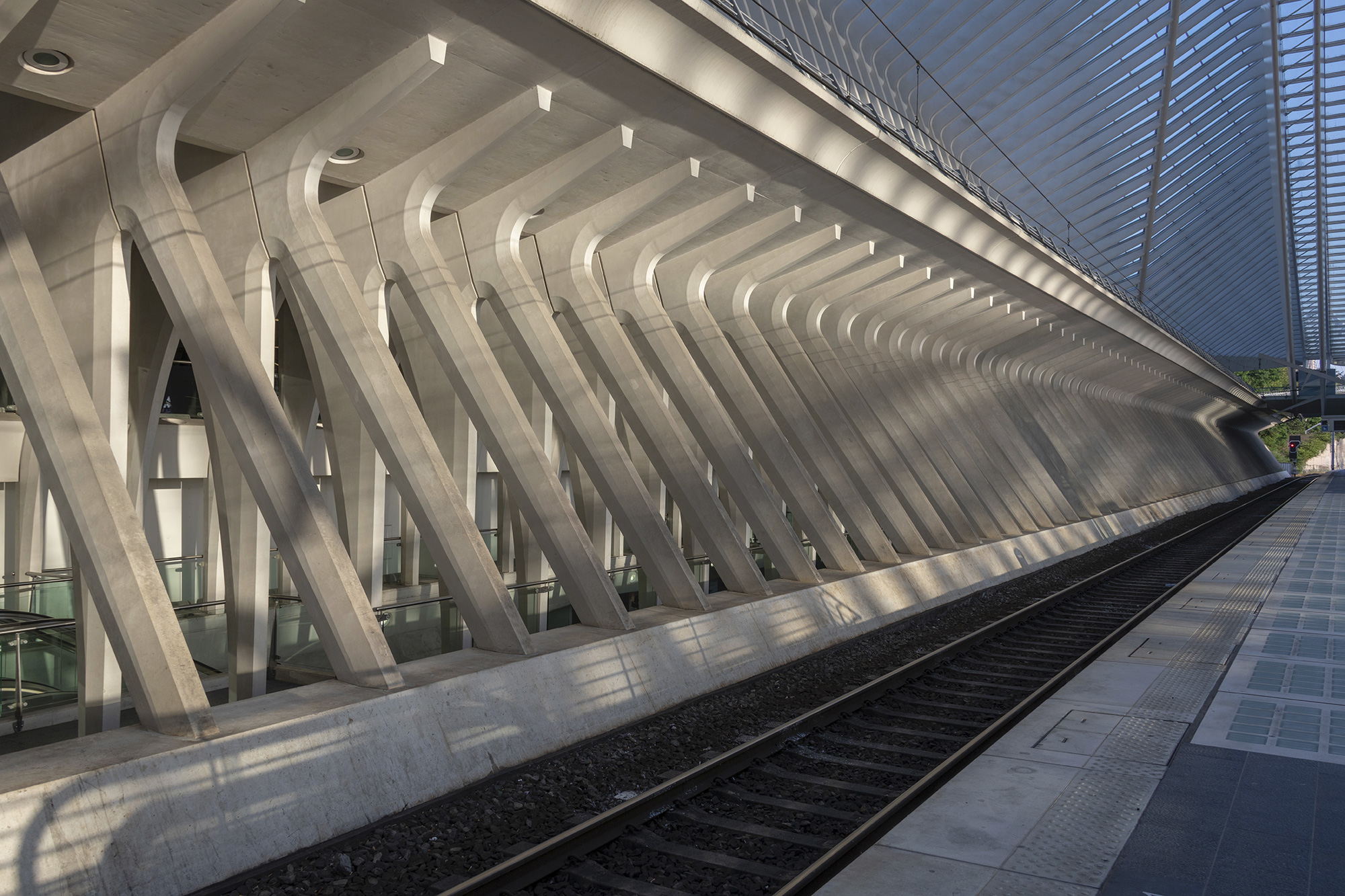 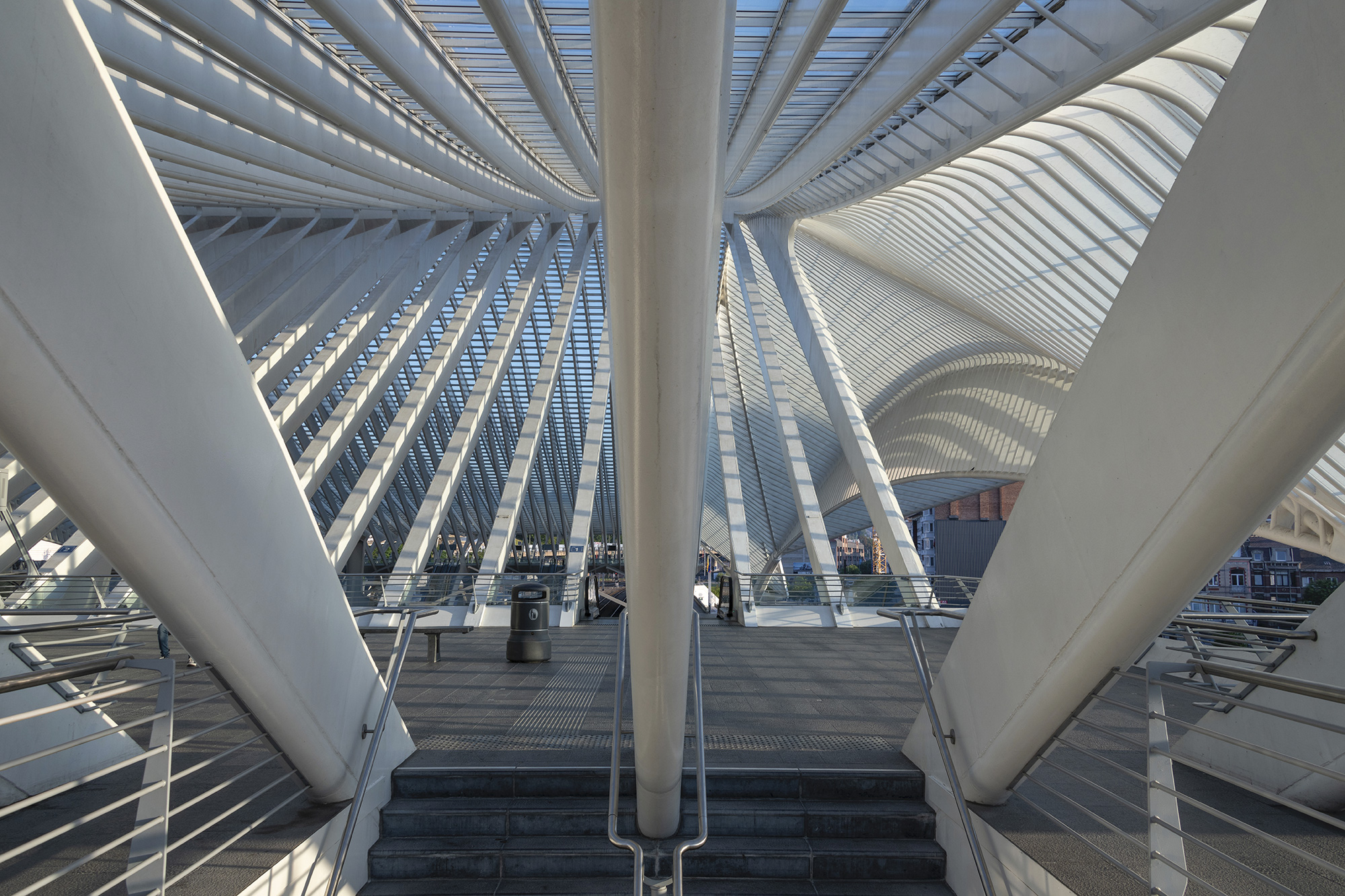 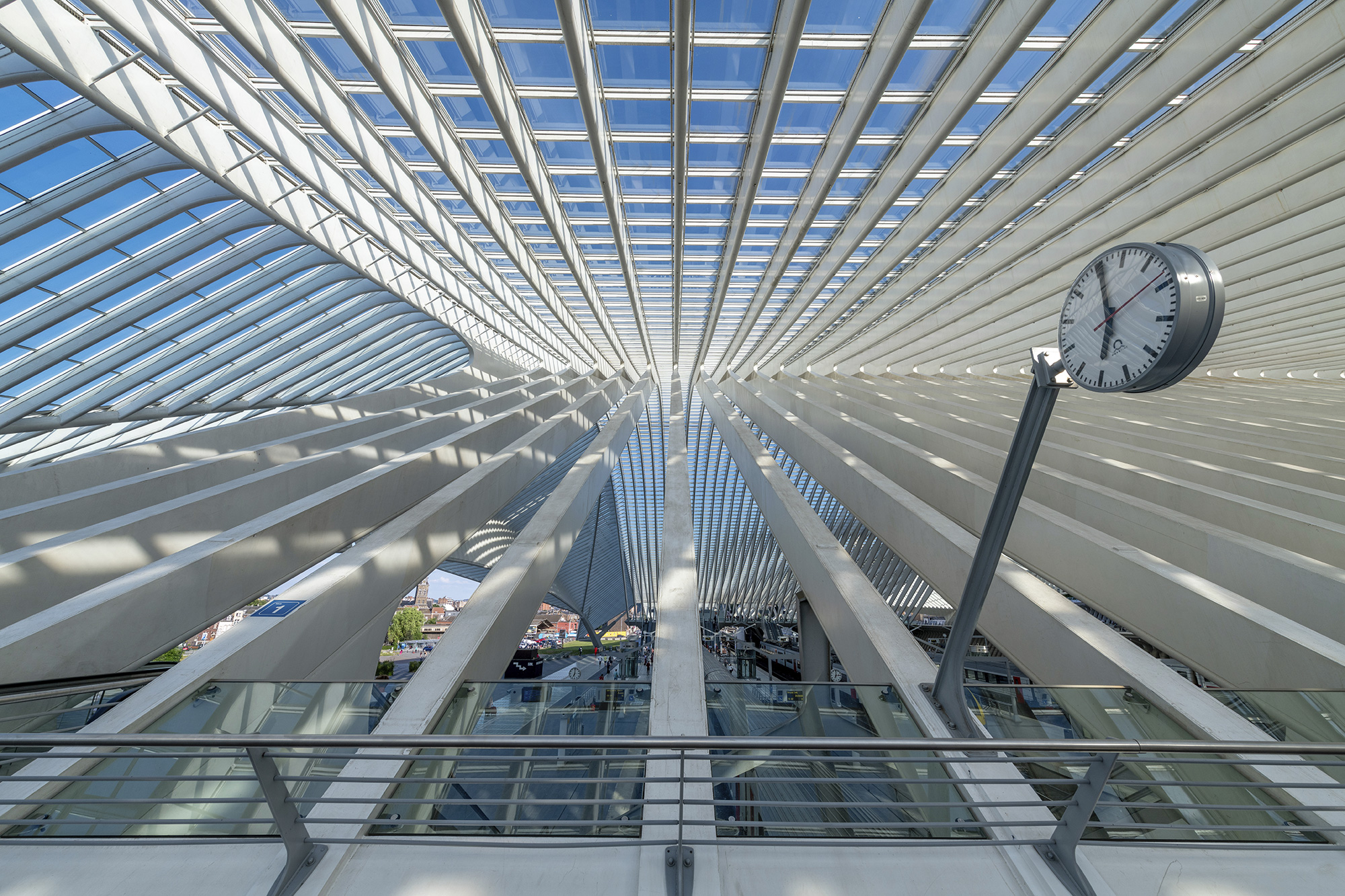 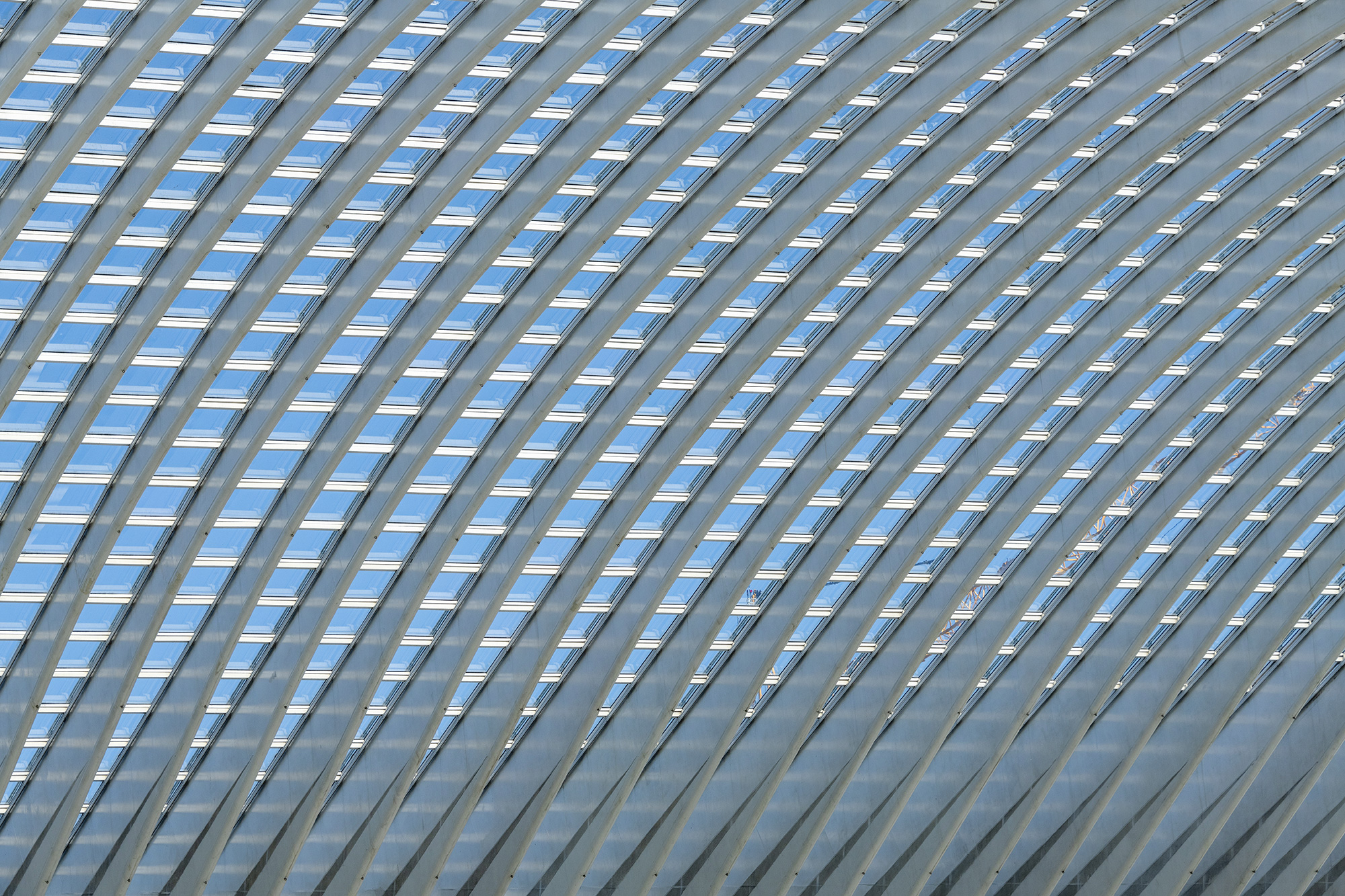 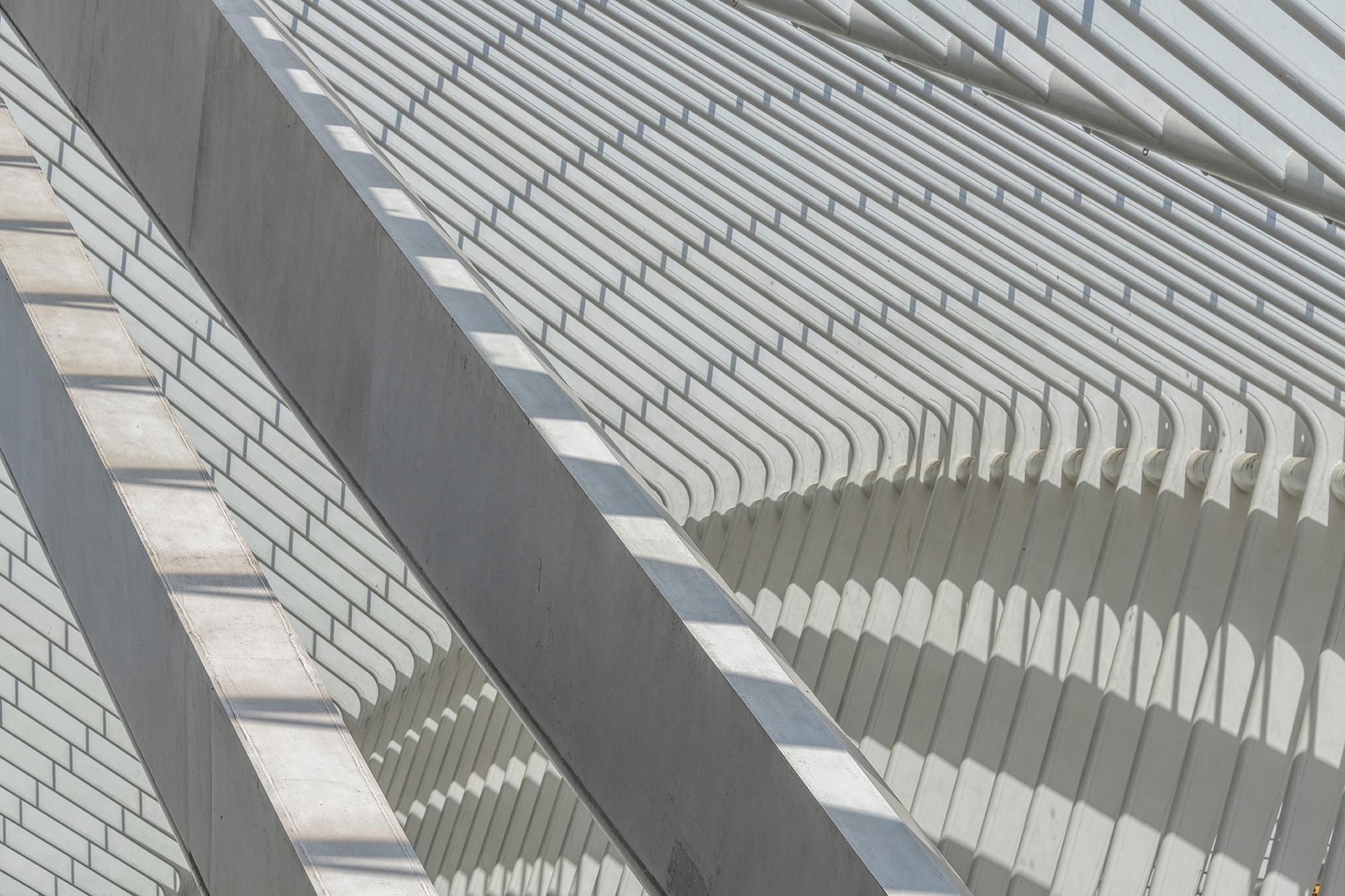 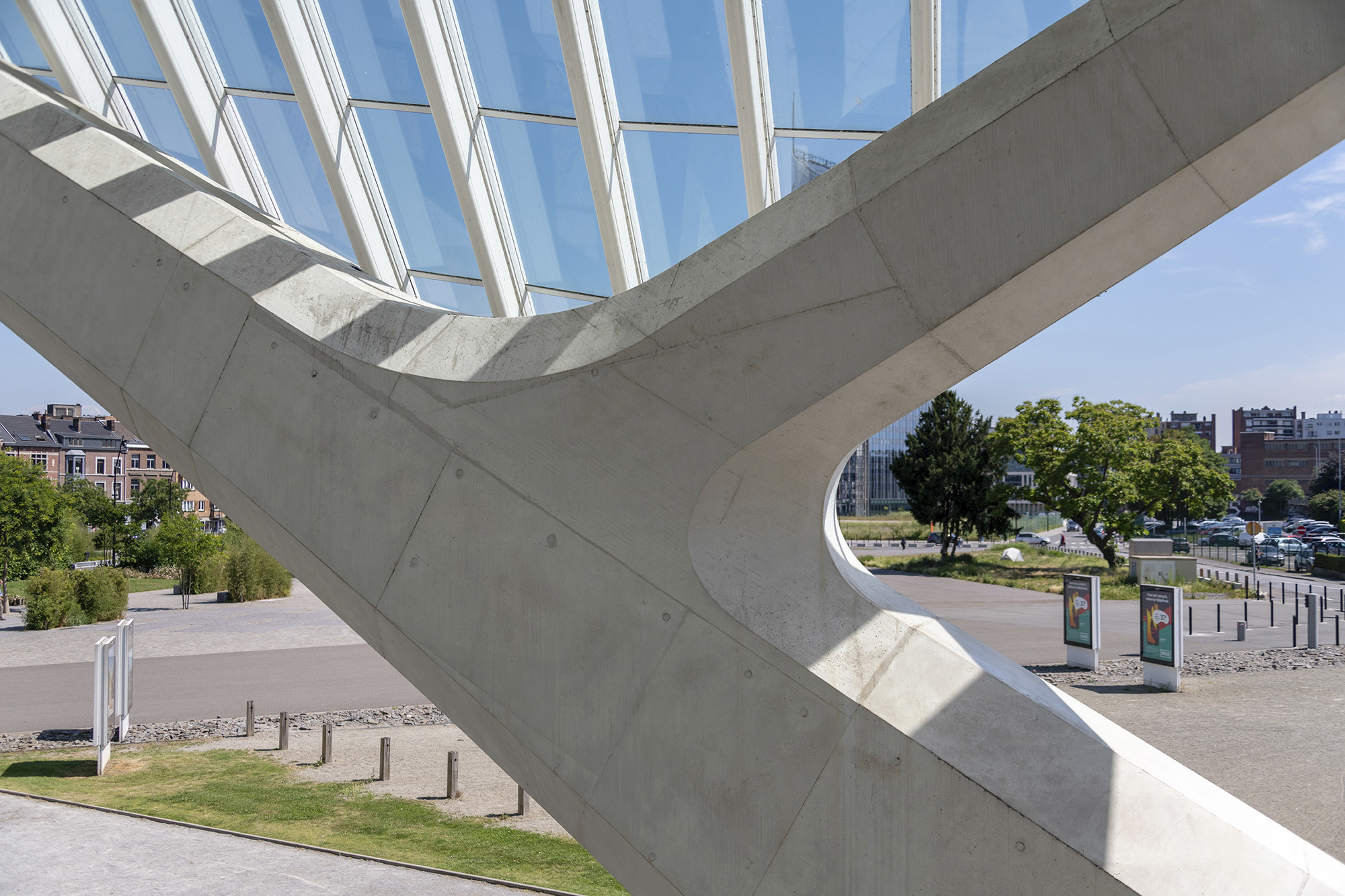 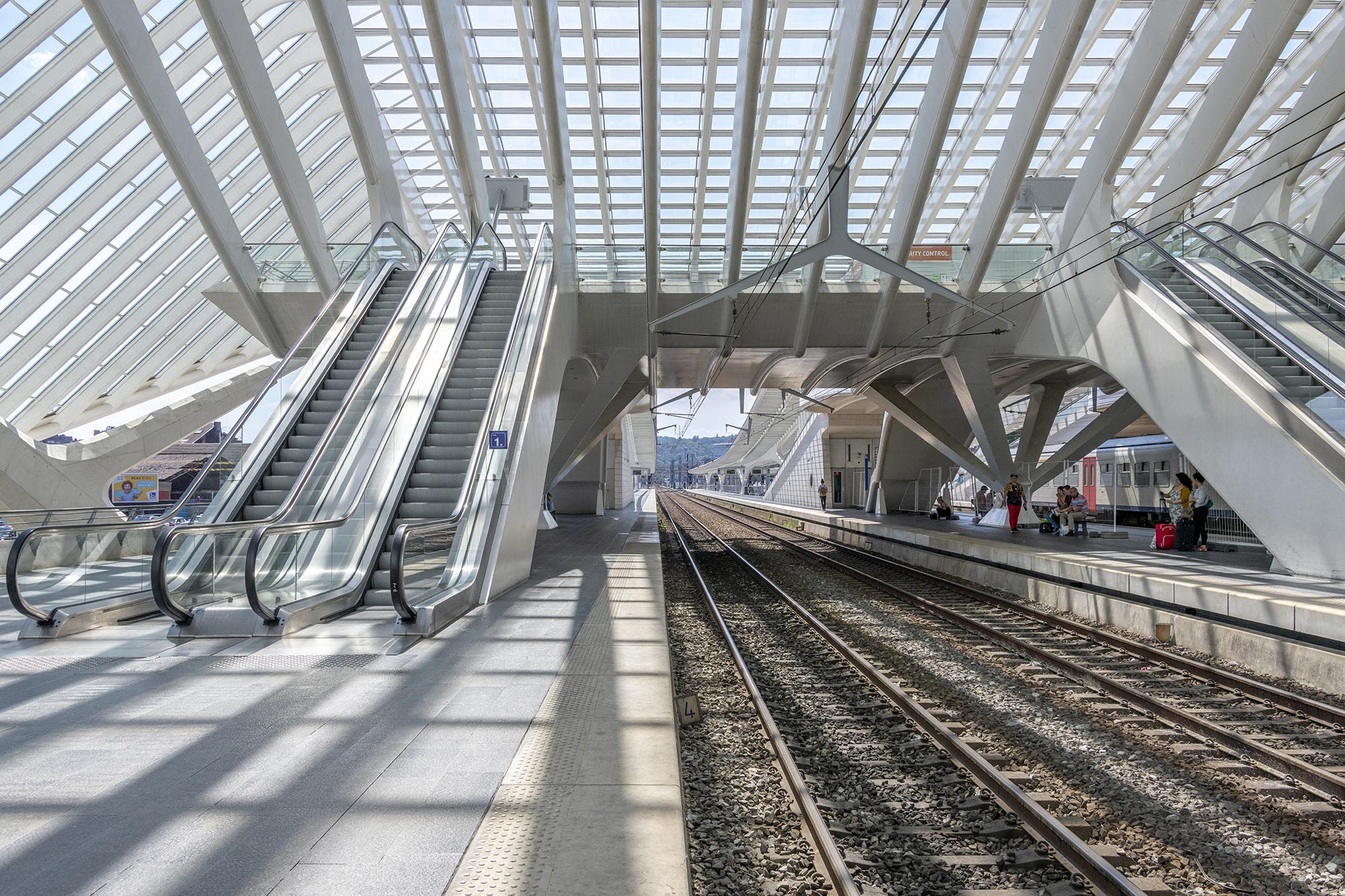 In 1996, Santiago Calatrava, the Spanish architect and engineer, won the competition to create a new high speed train station in Liege, Belgium. Replacing the Liege Guillemins station dating back to 1958. Calatrava’s solution uses one gigantic arched roof 160 metres long and 32 metres high. Below the platform level is an arcade of shops and facilities with the feeling of being inside a whale. This level is lit from above by glass bricks seen at platform level.

The station is made of steel, glass and smooth white concrete. The station had to be kept open for the entire period of the build, so it took over ten years to build, finally opening in September 2009.

Linking Areas of the City

The new station bridges two parts of the city, previously split by the railway tracks. As the station is always open, it is possible to walk straight through to the hilly area of the city. Here Calatrava uses stunning high vaulted cathedral-like arches – reminiscent of the Gaudi’s Casa Milà interiors in Barcelona.

Each area of the station is served by: stairs, escalators, lifts and even shallow-angled moving walkways.

These photographs and more are available on Alamy

This site uses cookies. By continuing to browse the site, you are agreeing to our use of cookies.

We may request cookies to be set on your device. We use cookies to let us know when you visit our websites, how you interact with us, to enrich your user experience, and to customize your relationship with our website.

Click on the different category headings to find out more. You can also change some of your preferences. Note that blocking some types of cookies may impact your experience on our websites and the services we are able to offer.

These cookies are strictly necessary to provide you with services available through our website and to use some of its features.

Because these cookies are strictly necessary to deliver the website, refuseing them will have impact how our site functions. You always can block or delete cookies by changing your browser settings and force blocking all cookies on this website. But this will always prompt you to accept/refuse cookies when revisiting our site.

We fully respect if you want to refuse cookies but to avoid asking you again and again kindly allow us to store a cookie for that. You are free to opt out any time or opt in for other cookies to get a better experience. If you refuse cookies we will remove all set cookies in our domain.

We provide you with a list of stored cookies on your computer in our domain so you can check what we stored. Due to security reasons we are not able to show or modify cookies from other domains. You can check these in your browser security settings.

These cookies collect information that is used either in aggregate form to help us understand how our website is being used or how effective our marketing campaigns are, or to help us customize our website and application for you in order to enhance your experience.

If you do not want that we track your visit to our site you can disable tracking in your browser here:

We also use different external services like Google Webfonts, Google Maps, and external Video providers. Since these providers may collect personal data like your IP address we allow you to block them here. Please be aware that this might heavily reduce the functionality and appearance of our site. Changes will take effect once you reload the page.

The following cookies are also needed - You can choose if you want to allow them: